Preparatory work for the future Espace Riopelle is under way. Thus, the Central Pavilion, the Gérard Morisset Pavilion, and the Charles Baillairgé Pavilion are closed.

The Pierre Lassonde Pavilion remains open and have plenty to see.

The Musée national des beaux-arts du Québec will open a new chapter in its history with the creation of the Espace Riopelle, a pavilion dedicated to Jean Paul Riopelle that will be integrated into the Musée’s existing complex.

The bond between Jean Paul Riopelle and the MNBAQ began many years ago. In 1956, the MNBAQ became the first museum to acquire one of Riopelle’s works, and it has been passionately committed to promoting the artist ever since. Today, the MNBAQ houses the largest public collection of works by the painter and sculptor.

In the 1980s, Riopelle himself dreamed of creating an exhibition space devoted to his own work in dialogue with the work of other artists, in what is now the Charles-Baillairgé Pavilion. Soon, in almost the same spot, his dream will become a reality.

Construction will begin in 2023, the year of Riopelle’s 100th birthday celebrations. Located at the end of Wolfe-Montcalm Avenue and overlooking the Plains of Abraham, the new pavilion will replace part of the current Central Pavilion. With its breathtaking views of the river, the building’s exceptional location will reflect the distinctive qualities of Riopelle’s work, particularly its deep connection with nature. 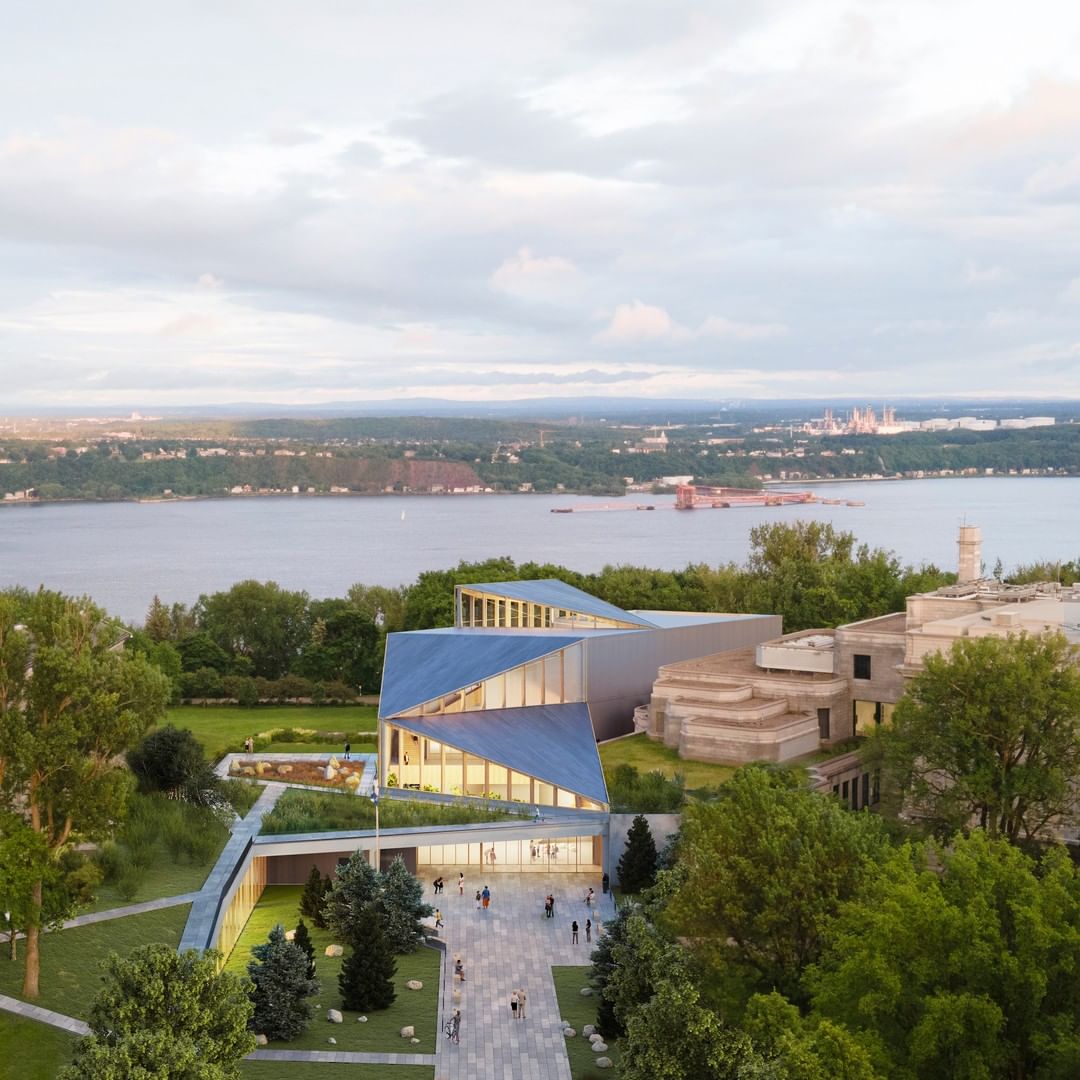 The MNBAQ is pleased to unveil the winning preliminary design and firm of the architecture competition for the future Espace Riopelle, which will house the world’s largest public collection of works by Jean Paul Riopelle, slated for inauguration between the end of 2025 and the beginning of 2026.

“The Espace Riopelle will be a true intersection and create a focal point within our museum complex. Located in the heart of the Musée, the site will reflect our vision of a living and inclusive museum and will function as a locus of contemplation and discovery. This distinctive and innovative space will welcome people from all over the world to encounter and explore the foremost collection of Jean Paul Riopelle’s work.” – Jean-Luc Murray, MNBAQ’s Director General

Following the architectural competition, held from March to August 2022, the Québec firm Les architectes fabg was chosen by the jury to design the Espace Riopelle. The concept was developed in collaboration with SNC-Lavalin and LEM experts-conseils.

A glimpse of the project 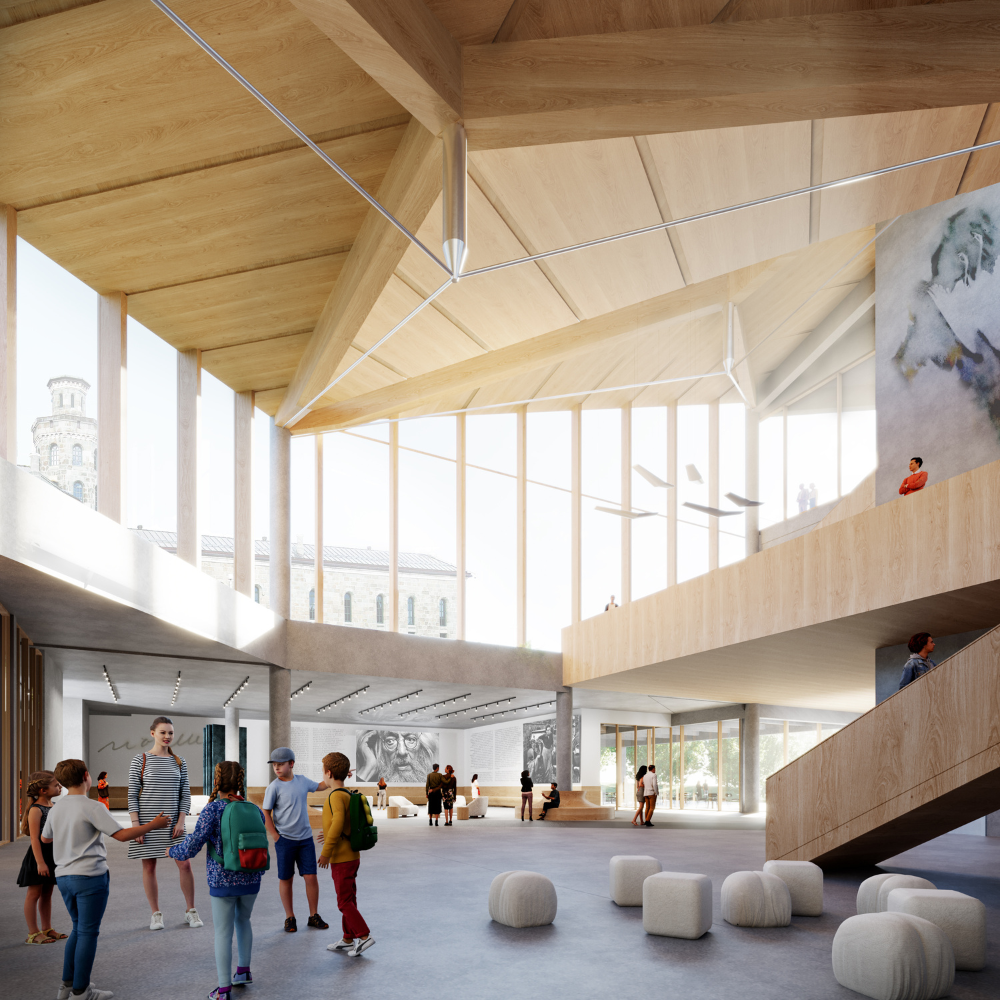 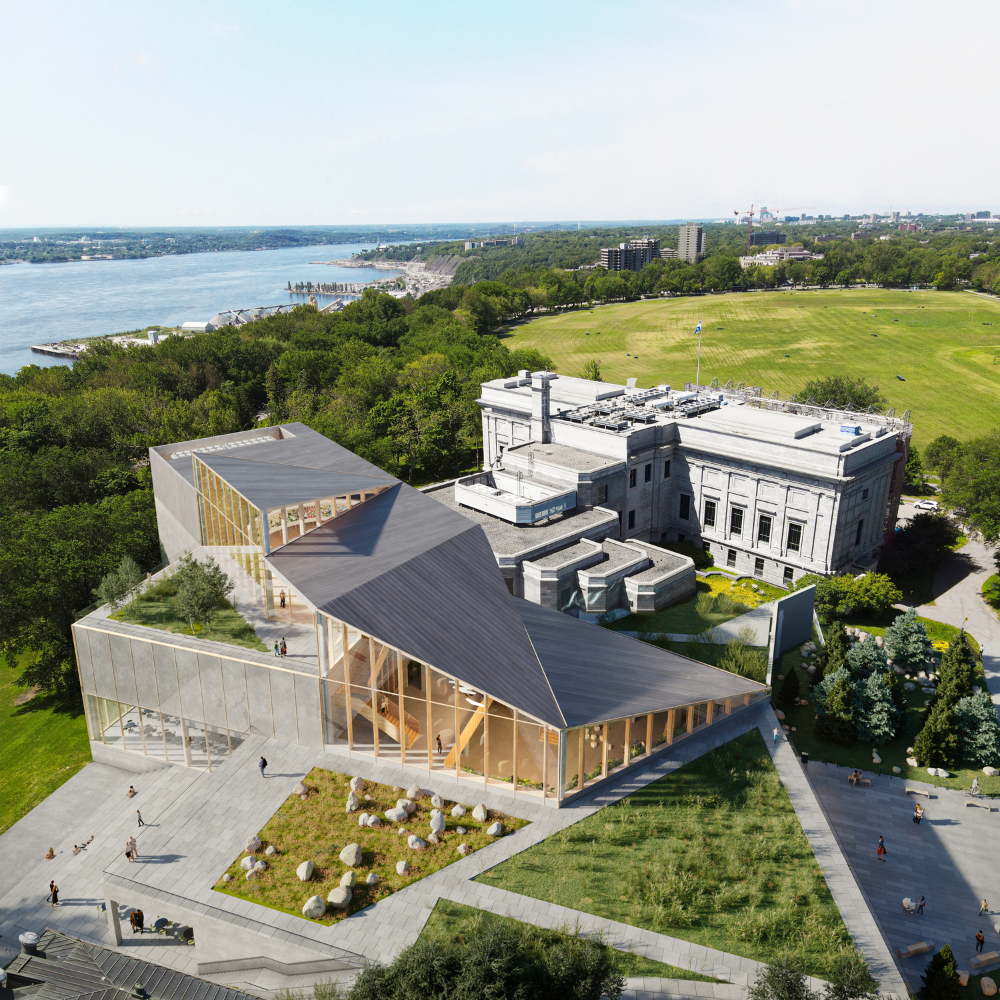 Founded in Montréal for over sixty years but known as Les architectes fabg since 1988, the Québec firm is reputed for the quality of its achievements, for which it has received nearly 50 awards and mentions in Québec and around the world. Under the direction of Éric Gauthier, winner of the Prix Ernest-Cormier, the most prestigious award bestowed by the Government of Québec in architecture, the firm has overseen technically and environmentally innovative projects such as the headquarters of the Cirque du Soleil, the head office of the Caisse de dépôt et placement du Québec (with Lemay), the Théâtre de Quat’Sous, and the Auditorium de Verdun.

The firm has recently received the Grand Prix d’excellence of the Ordre des architectes du Québec and has particulary stood out in the museum sector, by transforming the Musée d’art de Joliette, restoring the Stewart Museum, converting the former US pavilion by Buckminster Fuller at Expo 67 into the Biosphere, an environmental museum, and creating the Montreal Science Centre in warehouses in the Old Port of Montréal.

“Our first objective was to harmonize with Riopelle. Inspired by a revealing expression of the artist who said that he was constantly fleeing, we wanted to create a building that reflects his work in perpetual motion.” – Éric Gauthier, architect and partner from the winning firm

A choice that reflects Riopelle’s work

The architecture will lend itself to numerous interpretations through its terracing in keeping with neighbouring buildings that sometimes evokes the artist’s studio with its wooden ceilings and sometimes the northern environment and the Isle-Aux-Grues landscape with its green terraces displaying varied species. Natural light will bathe the proposed circuit, which will culminate in the circular space devoted to Riopelle’s masterpiece L’Hommage à Rosa Luxemburg (1992), where the public will also be able to admire spectacular views on the Plains of Abraham and the majestic Saint Laurence River.

“The notion of territory, indissociable from Québec’s identity and Riopelle’s works, also admirably inspired the winning firm. Both the works in the Québec collection and those recently donated by patrons of the arts will broaden the influence of Jean Paul Riopelle’s monumental work and the new pavilion will make the overall experience of the MNBAQ even more memorable. The future Riopelle Space will become a genuine source of collective pride.” – Christiane Germain, Chair of the Board of Directors of the MNBAQ

Here are the four applications selected by the jury to move on to the final stage of the competition:

The competition is decided by a jury of seven members who have complementary backgrounds and expertise: four eminent architects, two museum specialists, and a representative of the Jean Paul Riopelle Foundation. 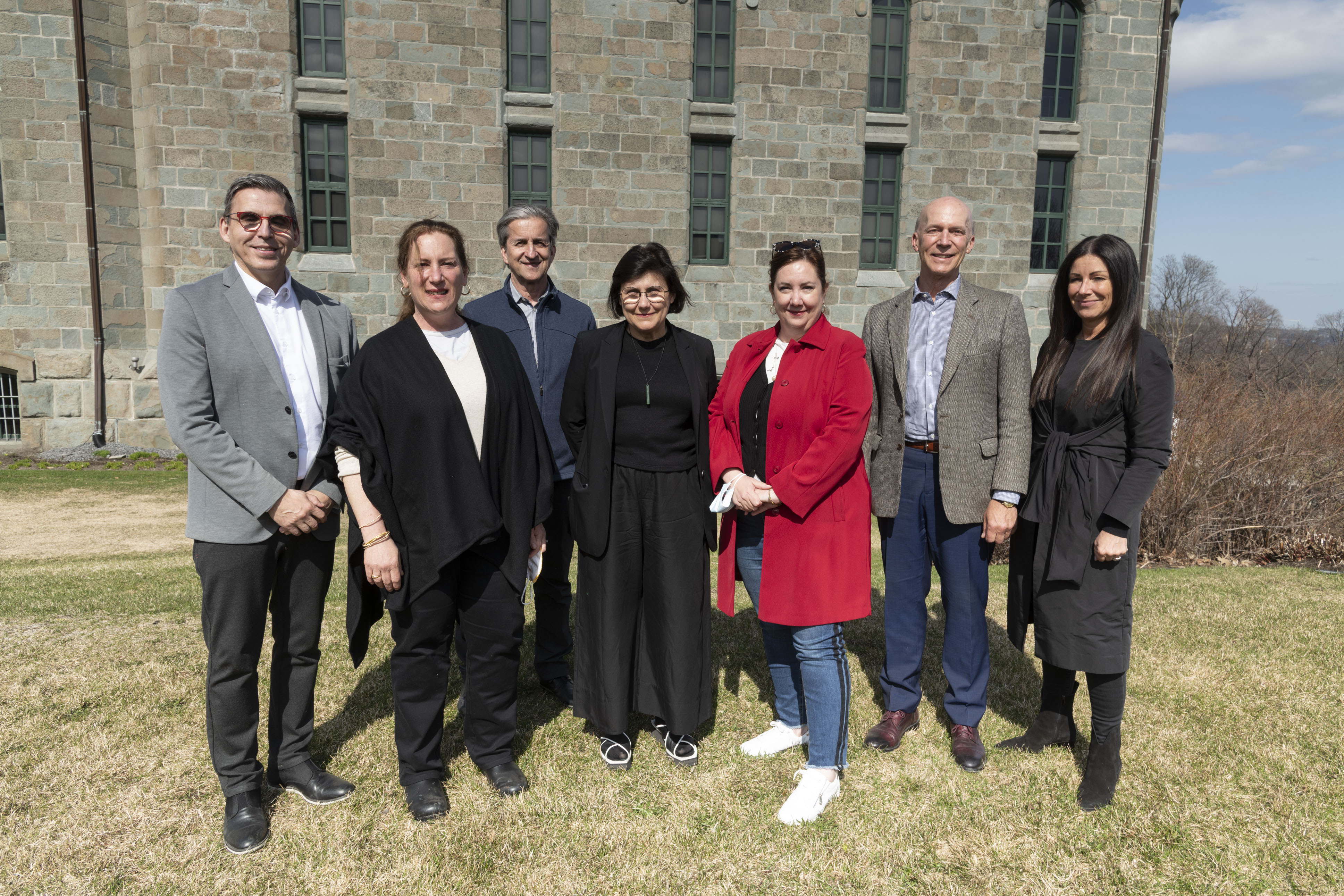 He has a multifaceted experience in the field of museology, where he has held various positions in the sectors of education, conservation, exhibition design as well as organization management.

She is an expert in the development of targeted audiences whose work has been recognized by her peers in American, Canadian and European museums.

A Quebec architect that has designed many buildings internationally. For several years, he has devoted himself to projects north of the 55th parallel in northern environments.

A French architect with rich international experience. Her firm, Jakob + MacFarlane, is recognized for its playful and innovative vision, its specialization in issues related to winter weather as well as its sensitivity to sustainable development.

A Canadian architect recognized for her many achievements, including Quebec City’s Théâtre Le Diamant, and whose expertise is related to the construction or renovation of buildings in complex environments.

A retired architect with a solid backgroung in the renovation of heritage buildings in Quebec City, including the Îlot du Palais and the Petit Séminaire de Québec.

A renowned cultural and philanthropic leader in Quebec and Canada, she has contributed to the development of many organizations at the national and international levels.

This major $42.5 million project will be completed thanks to a unique partnership between the Government of Quebec, the MNBAQ, and the Jean Paul Riopelle Foundation.

​A $2.5 million contribution from the City of Québec will allow for the creation of a brand new room dedicated to his monumental L’Hommage à Rosa Luxemburg (1992), a narrative fresco composed of 30 paintings. It is widely considered to be the hallmark of Riopelle’s artistic vision.

Following the announcement of the winning firm of the architectural competition, the phases of drawing plans and specifications, and closing the Gérard-Morisset Pavilion will follow. Construction work will then begin with the opening of the new pavilion scheduled between the end of 2025 and the beginning of 2026.

Jean Paul Riopelle at the MNBAQ

The celebrations of the centenary of Jean Paul Riopelle’s birth will culminate in the inauguration of the new pavilion at the MNBAQ. But the Musée has not waited until now to honour Riopelle’s work, having devoted numerous exhibitions and publications to the artist over the years.

Here you will find questions and answers about the Espace Riopelle.